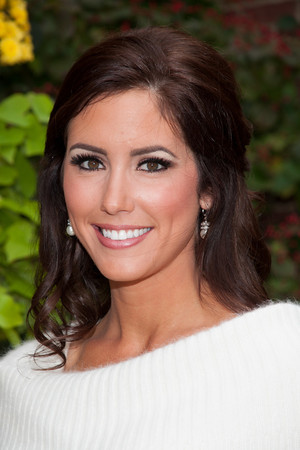 On October 27th 2012, I had the honor of doing makeup for a contestant of the Mrs. North Carolina 2013 competition. Josie Sanctis, the winner, is a woman with a warm heart and a passion to bring awareness around Trichotillomania – a disorder that urges people to pull out the hair from their bodies (scalp, face, arms, legs, etc.) from the root. Josie, who has been effected by Trichotillomania herself, touched me with her personal journey through this disorder.

I did makeup for Josie during the first half of the competition, for her interview, which consisting of 50% of her score. The picture shown on the left was taken during this time. We went for a softer smokey look with warm browns around the lids and a bone color as a highlighter. Her eyes were lined with black gel eyeliner to make them stand out and pop. I added a soft pink on Josie’s lips to add a touch of color to the existing neutral pallet.

We did add on some false lashes and tailored a beautifully arched brow. And let it be known, that Josie did a wonderful job of growing out her lashes and brows for the competition. I even had to pluck a few brow hairs. It’s a wonderful thing to witness someone make such progress. Here’s to you, Josie! Continue to shine!