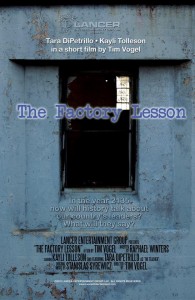 The Factory Lesson is a short story that takes place in the future. The year is 2135 A.D. or 2121 A.O. (After Obama). A 12 year student is almost heart broken at what she sees in this wasteland; a factory in ruins. Once a powerful machine that allowed Americans, as they were called, to flourish and prosper.

But through the greed and egos of corrupt-bought and paid for “politicians”, the government created policies that allowed businesses to have their goods and services produced in other countries. Thus the decline of American Manufacturing. The country fell into decline and imploded on itself. Millions were left unemployed, homeless and starved. Having no health insurance, families from all parts of the country eventually moved to other countries or just gave up, got sick and all died off. America became a police state, the likes of which the world has never seen.

How could this happen? Ask the people in Washington, DC that DARE call themselves leaders.

When Tim Vogel asked me to take part in this film, I was both honored and also thought, “I’m not an actress.” nor am I a big political buff. Don’t get me wrong, I have great beliefs about this country and the world as a whole. I care a great deal. In my opinion, I feel like our whole government needs to be restructured or shut down and a new regime brought into play (however, now the more I have been listening to the political candidates, I see someone feels the same way I do).

I’m contemplating going to Burning Man in Black Rock City, NV this year. Maybe that will spark an idea, of a world I’d like to live in? Seems like a good place to begin, and spread the intention of “gifting” in a community. Ultimately, I feel everything starts with ourselves, with you, with me, as an individual, making choices that will in turn create unified change. When Obama recites the words of Ghandi saying, “Be the change you wish you see in the world”, that is a tune I consciously adapt into my everyday life. Knowing someone WILL be elected as our president and knowing I make a difference in who that is, well, it for sure makes me want to vote. So, I’m happy to be a part in this film and I hope it brings some awareness to those of you out there.

There is no power greater than the power you exude in yourself. Think and feel LOVE, and watch what happens in your life. Speaking of LOVE, I love this….

….it reminds me a lot of John Lennon singing “Revolution”. (I can also say The Beatles. However, note the graphic in this link.)

I’d like to say I had so much fun working with everyone on set. We enjoyed ourselves a great deal. It’s so pleasing to “work” in environments like this. I wish everyone out there to be blessed in such ways. Remember, it starts with YOU!

4 thoughts on “Premiere of “The Factory Lesson” : A Short Film”